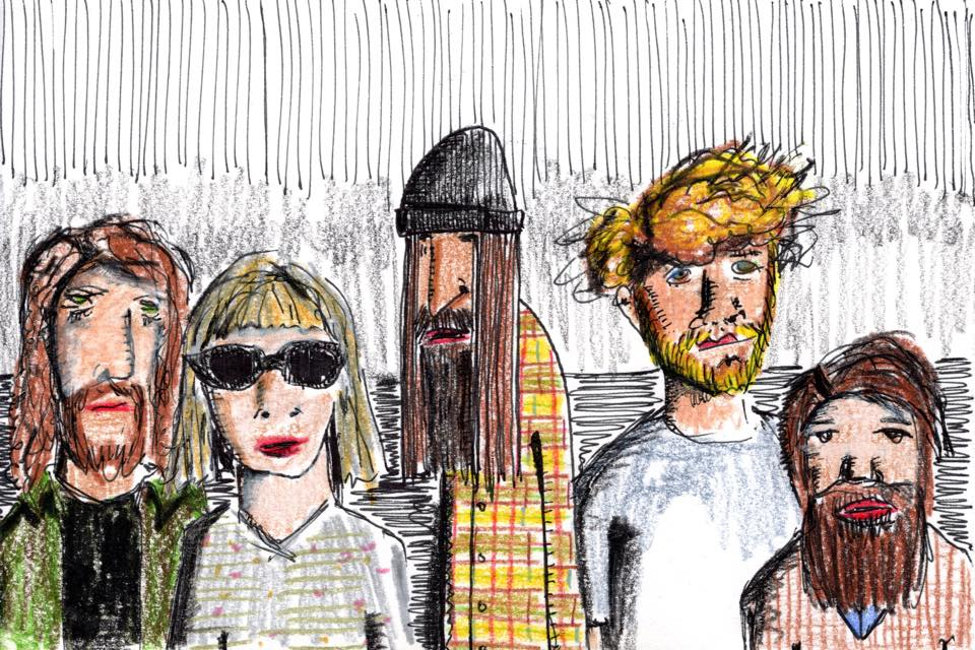 So I’ve been listening to a lot of doo wop lately, and it’s led me to rediscover that magical, oft-forgotten era of American popular music conveniently by Elvis’ indoctrination into the Armed Services and the Beatles’ appearance on Ed Sullivan. There were no real superstars during this time, but countless harmony groups cranked out endless hits boasting joyous melodies and driving rhythms. Both Karen Meat and the Vahnevants draw inspiration from this era and its melange of hip styles. Girl group harmonies and slinky dragstrip guitars permeating their respective sounds.

Karen Meat and The Vahnevants hail from Des Moines, Iowa, where the musicians are a tightknit bunch with a penchant for collaboration. Given their shared interests and buddy status, It’s only right and natural that Karen Meat (Arin Eaton) and the Vahnevants would make a record together. The resulting EP,“Karen Meats the Vahnevants,” will not disappoint fans of either act.

On first listen, the four songs on this EP might sound like the Vahnevants with a different frontperson. Closer inspection, however, reveals Eaton’s songwriting assuming an equal role. The creative signatures of the two acts blend well, with melodies teased out by guitars as much as vocals.

“All Thumbs” kicks off the EP with some serious swagger. Guitars sulk and preen, while Eaton delivers a bit of streetwise girl-group bite on the bendy melody. “I Thot We Were Okay” employs further slack, a laconic Eaton repeating the line, “I thought we were okay, but we’re not okay” before intoning in a low moan, “I cried.” A bizarro surf bridge ensues, bolstering the Munsters theme-vibin’ garage stomp of the main riff.

The ‘50s feel comes out swinging on “The Falling.” There’s a peacock strut dirtying up the 6/8 shuffle beat, and the fuzz guitars imitate bari sax growls. Hell, there’s even a smidge o’ cello and some ivory ticklin’ to give it that Spector shine.

Throughout the proceedings, them Vahnevant boys whip out lil’ lassos of C&W licks and strangle vibrato-laden leads out of their guitfiddles. “Karen Meats the Vahnevants” is the musical equivalent of falling off a barstool. Morricone banshee wails blow by like tumbleweeds, and the overall effect is something akin to Joe Meek scoring a western.

For all the obvious points of aural reference, “Karen Meats the Vahnevants” never wanders into pastiche. The lyrics hit on the age-old concerns of rock ‘n’ roll (falling in love, falling out of love, getting soused) but framed in modern terms (they use the word ‘thot’ in a song title, fer fuck’s sake). The bleached-out recording–captured by Des Moines’ busiest taper, Phil Young–benefits the songs, the vocals at once present and distant, a thick film covering the lens

So here ya go: rock ‘n’ roll chocolate and peanut butter. Eat y’self fitter and grab the tape, out now on the recently revived RULE_OG_Y label.

Brooke D takes on Brooke D on ‘Let it Happen’

Eddie succumbed to longtime struggle with mouth cancer. He was 65. He leaves the memory of angels with cigarettes, Eruption, and countless other tropes....

Merde . . . I spilled some French dressing on my guitar

It seems a little awkward that the newest arbiter of garage rock, roots punk should be purported by a French band named, Destination Lonely....