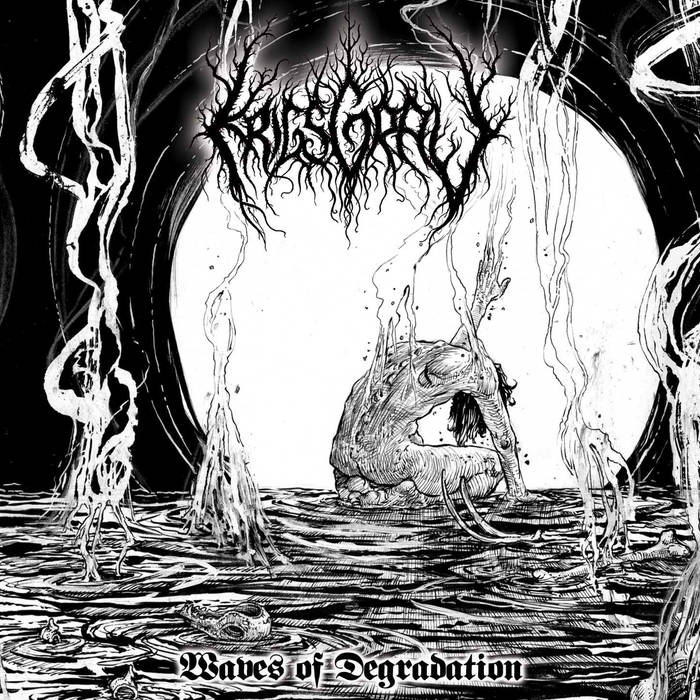 I was already sweet on Krigsgrav due to their prior album, “The Carrion Fields,” which made my top five in 2014. And while “Waves of Degradation” may be more subtle and thus trickier to embrace, and displays a slight style shift for the band, it offers no shortage of golden moments that found me falling in love again.

It doesn’t hurt that the introduction of first track “Under Trembling Stars” sounds a whole lot like Anathema. As it gains momentum and heads for black metal territory, one thing noticeably absent is as much of an Agalloch influence. This is pagan, atmospheric black metal to be sure, but with a slightly more post-modern twist. The clean vocals that enter the track cement that, as does the overall embrace of a middle tempo, though it ramps up to mesmerizing full blast at times. The use of mouth harp adds a great folk element.

“Son of the Stones” has an almost Cure-like new wave style to it, rather in the vein of Alcest. The melancholy melody lines woven through its center are beguiling, as is the high tremolo picking that leads into the final moments. Here the spectre of Agalloch does raise its head, which is no bad thing. “The Failures of Man” starts languidly, then settles into a mid-paced trudge yet shows no lack of intensity, feeling very driven and purposeful. More Cure-like gloom follows, then morphs into some quiet tremolo, and the urgency and volume builds until it abruptly plunges to earth to be replaced by chunky riffs and wistful Agallochian chords. Shortly thereafter, high, ethereal notes tease at the heavens to finish out the song while plunging chords circle the drain to hell. The layering and diversity of this track is wondrous to behold.

“To Rest Beneath the Waters” is the instrumental penultimate track that makes excellent use of violins to sound both eloquent and elevated, while also being incredibly lovely. It sets the stage for not just the album’s finale, but its highlight, the monstrous, sprawling, nearly 16-minute “As Color Fades From the Earth.” Now, the use of film samples in music can be totally overdone, or else, it’s leveraged masterfully. Here it is most certainly the latter, as a moment from the post-apocalyptic soul crusher “The Road” is utilized brilliantly. The song moves from high point to high point, making use of choir vocals, more mouth harp, and a cornucopia of enthralling melodies. Its most jaw-dropping segment comes just prior to the 5:30 mark, when it explodes into blackened velocity, then hammers out Cascadian tremolo guitar that summons pure ecstasy. The chord changes are perfection, evoking raw, pagan glory. Later it subsides into single, solemn guitar notes that again nod toward Agalloch, forming a lengthy interlude that bridges to a resumption of a faster pace, and finally the track sighs to completion with the sound of ocean waves crashing on a beach.

I listened to a staggering amount of black metal in 2016, and Krigsgrav once again managed to rise above the fray as some of the best to be found. Their playing and songwriting are stellar, but more than that, they exude a primal passion and sincerity that push them into a higher echelon.